In the mid 1990s, Barry embarked on his humanitarian journey with his dear friend Muhammad Ali. Since 1995, he has received prestigious global recognition for his work, including awards from countries such as Africa, India, Libya, & Bulgaria, to name a few.

Global Village Champions Foundation has also had a large presence after several Typhoons’ in the Philippines, sending hot meals & medical supplies to the most needy victims, with their fearless founder, Yank Barry at the helm. From South Africa to China; the US, Canada & the Bahama’s.

Yank Barry has tangibly changed the lives of millions

As Founder of Global Village Champions Foundation, Yank has been the recipient of more than 20 international humanitarian and peace awards, & has personally funded nearly all related international missions, which has fed nearly 1 billion people worldwide & counting.

Yank was one of the only privately funded efforts to respond quickly to the catastrophic earthquake which shook Port-au-Prince Haiti to the ground in January 2010.

He witnessed the devastation as the first images were broadcast by the media, & saw firsthand, the devastating effects to the most vulnerable; Haiti’s orphaned children. Yank didn’t wait for the main airport to be made fully operational, he flew to Haiti from his home in Nassau Bahamas with a chartered private plane numerous times to help the country’s most needy. Global Village Champions Foundation worked hand in hand with the Haiti Disaster Relief team, the Haitian Red Cross, the Haitian Rotary Club and the Seventh Day Adventist Hospital.

With an army of celebrity “Champions” in his corner, such as Celine Dion, Evander Holyfield, Andrea Bocelli & more, Yank’s life mission is to continue to see his dream & goal of “A Day Without Hunger” achieved.

Yank is most currently being recognized for becoming “the Jewish Schindler”, from his tireless efforts in saving both Muslim & Christian refugees from indescribable terror.
HAS SAVED MORE THAN

INDIVIDUALS FROM THE SYRIAN REFUGEE CAMPS 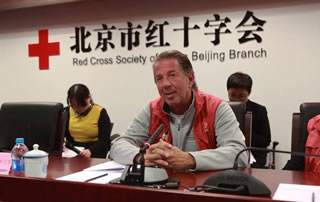 Yank has been heavily involved with the Syrian refugee crisis affecting Bulgaria & the surrounding countries in the region, saving over 1218 individuals from the refugee camps and giving them new life and hope in the Global Village Refugee Safe-house in Sofia.

From medical care to educating the children, Yank has also moved hundreds of individuals & families into new counties by cutting through political red tape, giving these refugees a fresh start away from their war-stricken counties. With the blessing & support of the President of The State Agency for Refugees; Council of Ministers in Bulgaria, Yank’s work is invaluable & truly one of a kind, as the emergent need for help only continues to grow.